Facts You Should Know About Lung Cancer

Lung cancer is the leading cause of death by cancer according to the American Cancer Society¹, causing more deaths each year than breast cancer, colon cancer, and prostate cancer combined. Approximately 14 percent of all new cases of cancer are lung cancer; in 2018 alone, 234,030 new cases of lung cancer will be diagnosed.

These statistics mean that roughly 154,050 people will die from lung cancer this year, the American Cancer Society reports². Lung cancer is widespread and lethal, and it’s crucial to seek medical attention at the first sign of a problem. That’s why everyone needs to know the facts about lung cancer. 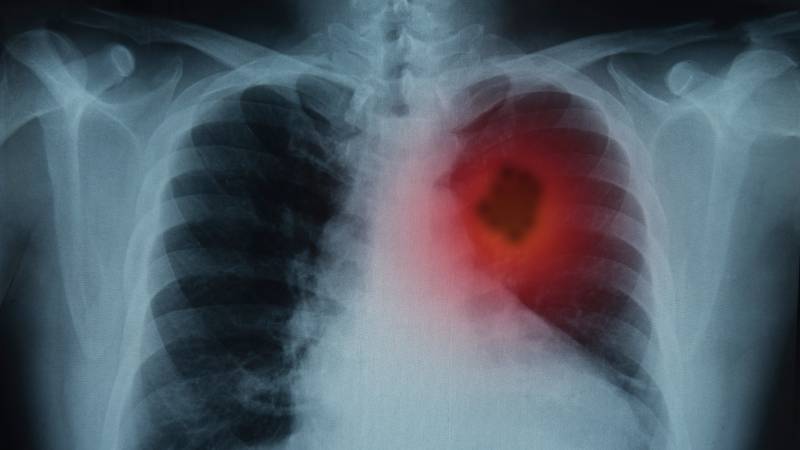 Like other cancers, lung cancer invades other parts of the body over time. Therefore, as the disease progresses, symptoms may evolve. Symptoms of more advanced lung cancer include:

How is Lung Cancer Diagnosed?

Contrary to what people often believe, lung cancer is not diagnosed via a blood test. Imaging tests are typically used initially to determine whether any growths are present. Lab tests may then be performed to make an official diagnosis. These tests look for the presence of cancer cells.

Examples of the types of imaging tests that may be performed to diagnose lung cancer include:

X-ray: A chest X-ray may be performed to look for unusual masses in the lungs.

CT Scan: This cross-sectional imaging test is more detailed than an X-ray, so it can more easily show tumors and even enlarged lymph nodes.

Low-Dose CT: Research has shown this test to be more effective at screening high-risk individuals than standard chest X-rays, reducing the mortality rate by 20 percent.3 A low dose of radiation is administered while performing the scan and the resulting high-resolution imaging helps detect tumors at early stages.

MRI Scan: Using radio waves and strong magnets, an MRI scan might be performed to see if lung cancer has spread to the brain or spinal cord. A contrasting material is typically injected to more easily detect changes in the body.

PET Scan: For a PET scan, radioactive sugar is injected into the blood. Since cancer cells grow more quickly than normal cells, they absorb more of this sugar than healthy cells and show up more prominently in such scans.

Bone Scan: To see if lung cancer has spread to the bones, a special, low-level radioactive material is injected into the blood. It travels to areas where changes are occurring in the bones, which can help doctors to zero in on cancer that’s spread.

Bronchoscopy: With this imaging test, a flexible tube is inserted down the trachea and into the bronchioles and bronchi of the lungs. This test is performed to check for the presence of large tumors and other blockages.

How is Lung Cancer Treated?

Like other types of cancer, lung cancer may be treated in a number of ways. Most patients undergo more than one form of treatment. The most common types of treatments for lung cancer include:

Surgery to treat lung cancer is highly complex. Prior to performing the surgery, a pulmonary functioning test is typically administered to ensure enough healthy lung will be left behind. The preferred treatment is a lobectomy, which involves removing one or more of the lung’s five lobes. When a tumor is too close to the center of the chest, a pneumonectomy — the removal of an entire lung — may be required.

Known also as RFA, radiofrequency ablation is a less invasive option for cancers that involve small tumors near the outer edges of the lungs. High-energy waves are used to heat the tumor, which destroys the cancerous cells and shrinks or even destroys the growth. This option doesn’t tend to cause any serious side effects other than pain and tenderness at the needle insertion site.

Radiation therapy may be prescribed as the only treatment for a lung cancer when surgery isn’t an option. External beam radiation is the most common method used with lung cancer. It may be used prior to surgery to shrink tumors and growths to more manageable sizes, which may make them easier to remove. It may be performed following surgery to eliminate any remaining cancerous cells. It may also be used to help to reduce the worst symptoms of the disease.

Chemotherapy involves the use of special drugs administered orally or intravenously. It’s often used in conjunction with radiation therapy and to enhance surgical treatments. For example, it may be used prior to surgery to make growths smaller and more manageable. When used following surgery, it is known as adjuvant chemotherapy, and it can be used to kill off remaining traces of cancer that weren’t removed surgically.

Immunotherapy can be used to treat some forms of lung cancer. There are several types of immunotherapy that work in different ways. A doctor may use immunotherapy to strengthen a patient’s immune system, to lessen the symptoms of other treatments, or to kill or change how cancer cells behave.

Not all patients respond to this type of treatment and the drugs administered may have side effects including fatigue, nausea, loss of appetite, and constipation.4

One promising form of targeted therapy for lung cancer involves drugs that target angiogenesis, which is also known as blood vessel growth. Tumors need blood vessels to live and grow, and angiogenesis inhibitors like avastin and cyramza help to block new blood vessel growth to treat the cancer. There are also drugs known as EGFR inhibitors, which target a protein called EGFR that is found on the surface of cancerous cells. When too much of this protein is present, tumors grow faster. EGFR inhibitors may help to slow this process.

In addition to traditional treatments like the ones outlined above, clinical trials for promising new lung cancer treatments are going on all of the time and may be worth exploring. However, the first step if you suspect that you have lung cancer is to seek medical attention right away. The earlier lung cancer is detected, the more treatment options you’ll have.