Despite nearing five years on the market, the Nintendo Switch is still a sales juggernaut. In fact, Nintendo’s hybrid console sold 28.83 million units in 2020 alone. Furthermore, the console’s lifetime sales just passed 89.04 million as of August. Can anything slow down the Switch?

Well, Nintendo isn’t willing to find out. As such, the company is planning to release a new model for the holiday season. Known as the Nintendo Switch OLED Model, this console revision sets out to make slight improvements on the base model’s design. However, does the OLED improve enough to satisfy potential buyers? Or is it best to wait for the long rumored Pro model? 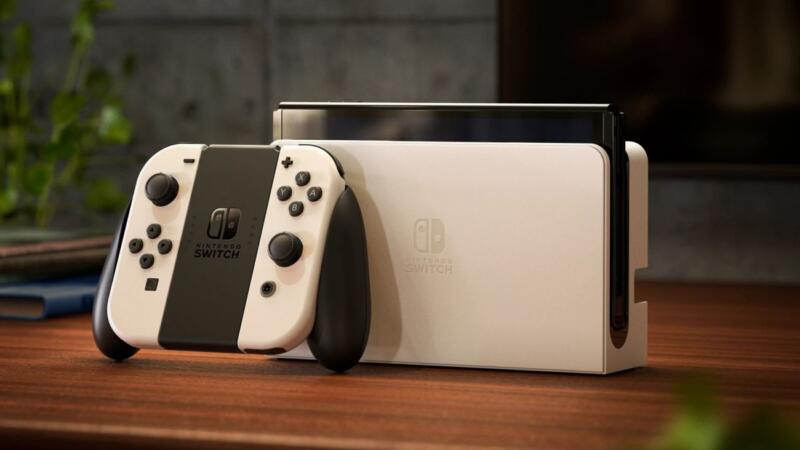 Set to release on October 8, the Nintendo Switch OLED Model will cost $349.99. This is $50 more than the original Switch model and $150 more than the handheld-only Lite model.

As the name implies, the defining feature of the Switch OLED is its brand-new OLED screen. Replacing the LCD screens used for previous Switch models, this new screen offers more vibrant colors and higher contrast levels. To take advantage of these improvements, Nintendo has increased the screen size from 6.2-inches to seven-inches.

On top of the improvements to the screen, the Switch OLED has received key upgrades to the audio, storage, kickstand, and dock. While Nintendo has been quite vague about the upgrade to the built-in speakers, consumers can expect:

Be it your first Switch or a replacement for an older model, no gaming console is complete without games to play on it. While there are plenty of excellent games already available for the system, Nintendo has an incredible lineup of games releasing this holiday season that any Switch OLED owner should keep their eyes on.

Despite influencing countless hit games over the years, Metroid has never been among Nintendo’s heavy hitters. As a result, fans are used to waiting a long time between numbered entries. In fact, it has been almost 19 years since the fourth main entry, Metroid Fusion. Fortunately, fans don’t need to wait much longer as Metroid Dread is releasing on October 8, alongside the Switch OLED.

Picking up shortly after the events of Fusion, Dread follows Samus Aran as she investigates a mysterious transmission from Planet ZDR. While exploring the planet, the hunter becomes the hunted as corrupted robots known as E.M.M.I. stalk the labyrinthine corridors of ZDR. Good thing Samus has a few new tricks up her sleeve—from more agile movement options to a new cloaking ability.

There is no better way to pass time with family and friends this coming holiday season than with Mario Party. This is even more true of Mario Party Superstars, which releases on October 29.

Building off the success of Super Mario Party, this new entry combines the modern advancements in the series with boards and minigames from past entries. In particular, Superstars sees the return of five boards from the Nintendo 64 classics and 100 minigames from both the Nintendo 64 and Gamecube games. Plus, if you can’t get everyone together in one room, you are able to play all modes online.

Announced alongside the Switch’s initial reveal in 2017, Shin Megami Tensei V has easily become the most anticipated RPG for Nintendo’s hybrid console. And rightfully so as mainline SMT games are known for their excellent gameplay and grand stories that cover plenty of mature topics.

Taking control of the nameless protagonist, players soon find themselves whisked away from modern-day Tokyo for its post-apocalyptic counterpart, Da’at. In order to survive the bloodthirsty demons that call Da’at their home, players merge with a mystical being known as Aogami to become Nahobino, something between demon and human. As Nahobino, build a team of demons, explore the mysterious wasteland, and determine the fate of the world.

If any of this sounds up your alley, Shin Megami Tensei V releases on November 12.

Is It Worth It?

Ever since Nintendo announced the Switch OLED, consumers have wondered if the new model is worth buying.

The reason most people are conflicted comes from initial expectations for the Switch OLED. Much like the New Nintendo 3DS, PS4 Pro, and Xbox Series X before it, many thought this new Switch model, colloquial called the “Switch Pro”, would be a significant upgrade over the original. The key upgrades being:

Instead of the Switch Pro, Nintendo is producing the same Switch with minor improvements to make it play better on the go. With all that in mind, it’s easy to understand the disappointment — especially considering Bloomberg’s recent report that at least 11 companies are in possession of development kits for a 4K Switch model.

Despite that, some are looking at the Switch OLED to upgrade from the base model or as their first Switch. So, is the Switch OLED worth it? The answer can be slightly complicated.

Your interest in buying the Switch OLED will depend on what you’re looking for from the system. If you are looking to play more in handheld or tabletop mode, the OLED offers the improvements you want with its crisper display and wider stand. If you’re primarily going to play the Switch on the TV, there isn’t much that the OLED offers, outside of the built-in LAN port. And if you already own a Switch, it will be cheaper to get a LAN adapter for your current system or buy the new dock separately through Nintendo’s online store.