Every year, two football teams come together to battle it out for the title of Super Bowl Champion – and if you’re a football fan, there’s no day more important than Super Bowl Sunday. No matter what happens during the Super Bowl game, it’s always an exciting evening of entertainment.

And there’s no better way to celebrate than with a food-filled Super Bowl party! Invite your friends to cheer on your favorite team with these football party favorite foods. 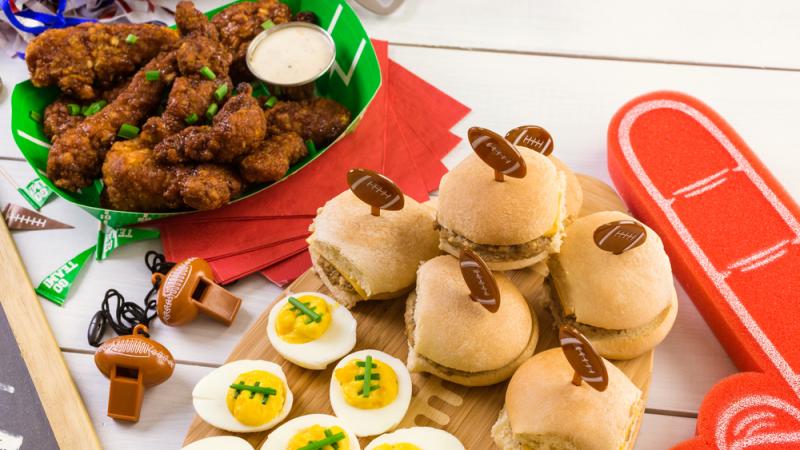 Chicken wings are by far the most popular Super Bowl food. The National Chicken Council¹ proudly boasts that more than 1.25 billion portions of wings are eaten on Super Bowl Sunday every single year. And wings are certainly tasty, but they’re also incredibly easy to make.

There are many different ways to make wings, but if you want really crisp, flavorful wings, you’ll need to fry them. One of the best buffalo wing recipes by Serious Eats² calls for chefs to fry the wings twice to ensure a truly crispy coating.

Another buffalo favorite for the Super Bowl is buffalo chicken – but if you don’t want to deal with the fuss of frying chicken wings over and over again, you can easily recreate this favorite food by using shredded chicken breast and plenty of bottled buffalo wing sauce to make a giant dish of buffalo chicken dip.

Buffalo chicken dip is as iconic as wings, and this dip is a Super Bowl staple. It brings all of the amazing flavor of fried wings without the fuss. Plus, it can be eaten with tortilla chips or carrot sticks, pleasing fans of all kinds. This recipe doubles easily if you’re feeding a huge crowd.

Want to really impress your guests? One of the most amazing food accomplishments you can have on Super Bowl Sunday is a gigantic snack stadium. These incredible food displays – which are entirely edible – have become popular in the past few years. They’re the perfect snack setup to place on the table and watch everyone marvel at.

Snack stadiums are basically just collections of snacks and other small bites served in the shape of a football stadium. You can go all out by creating a guacamole field, slider or sandwich walls, and breadstick goalposts, or you can simply arrange your drinks and platters in a stadium-like shape. There’s tons of inspiration to be found at Delish³, but the design and execution is up to you.

Typically, 7-layer dip is built from the bottom up, starting with refried beans. Chefs then layer on guacamole, sour cream, salsa, and shredded cheese, then top everything with diced vegetables, a chunky salsa like pico de gallo, olives, or even a protein like ground beef or pulled pork. The whole dish is scooped up with tortilla chips for easy snacking.

Nachos are such an important part of game day that they’re served in football stadiums across the country. But if you’re not watching the game in person, you can whip up your own nachos at home in mere minutes.

Making regular ole nachos is easy – all you need are tortilla chips and cheese – but if you want to really up your nacho game this Super Bowl Sunday, the recipe designers at Serious Eats⁴ have a few helpful tips. Try using thick, fresh-fried tortilla chips rather than store-bought ones and two types of cheese – regular shredded cheese and cheese sauce. You can also layer the chips and cheese to ensure every chip gets hit with delicious toppings.

If you’ve ever struggled to make potato skins, you’re not alone. It seems so easy, but every time you pull them out of the oven, they often end up leathery and inedible.

If you want to bring a generous plate of loaded potato skins to the table on Super Bowl Sunday, Serious Eats⁵ says secret is brushing the outside of the potatoes with oil (or even bacon fat) at least twice while they’re cooking.

Want to serve a protein at your Super Bowl party but don’t want to get stuck making burgers to order? A plate of sliders is a great – and easy – choice. Sliders offer so much flexibility, and you can churn out dozens in the time it would take you to make one regular-sized sandwich.

You can make sliders out of biscuits, Hawaiian or potato buns, or mini burger buns and fill them with anything from meatballs to miniature burgers, shredded chicken, or pork. You can also bake them in the oven in big batches for quick turnaround time.

Your 7-layer dip will need a companion on Super Bowl Sunday, so why not go with another fan favorite? Spinach artichoke dip is one of the best-loved dips, and it’s easy to quickly throw together. With two kinds of vegetables, you can even pretend it’s healthy.

To make this dip fast and easy, use frozen spinach and canned or jarred artichoke hearts. The two veggies are then mixed with a generous helping of parmesan cheese, sour cream, cream cheese, and mayonnaise. You can serve your dip at room temperature or after baking it for 20-30 minutes.

Football is a beloved Sunday ritual in the U.S., but especially in the South. You can bet that most TVs south of the Mason-Dixon line will be tuned in to the Super Bowl – and the dish everyone will be snacking on is pimento cheese.

Pimento cheese is a Southern tailgating staple. This delicious spread is made with shredded extra-sharp cheddar, chopped pimento peppers, and mayonnaise, then spiced with pepper, hot sauce, mustard, and Worcestershire sauce. It’s delicious on crackers or scooped up with chips.

No Super Bowl feast is complete without bacon, and one of the best bacon dishes you can serve at your party is bacon-wrapped jalapeño poppers. Easy to grab and eat one-handed, these poppers made from jalapeño peppers provide a bit of heat, but they aren’t too spicy when their seeds and ribs are removed.

To make your poppers extra tasty, don’t forget to stuff them with a mixture of cream cheese and chopped chives. They’re easy to assemble, and only need to bake for 10-15 minutes before they’re ready to serve.