The Leap Year Tradition: Why This Year Is The Perfect Time For Women To Propose

The Leap Year grants us an extra day on the calendar every four years. In turn, the world is reminded of some interesting folk tales and traditions that come along with this day. One of them is an old tradition that involves wedding proposals on February 29th.

This old custom involves women flipping the script on gender stereotypes and giving women the chance to propose to their partners. It’s unconventional, but after learning its origin story, you might be inspired to take advantage of Leap Day and partake in the tradition. 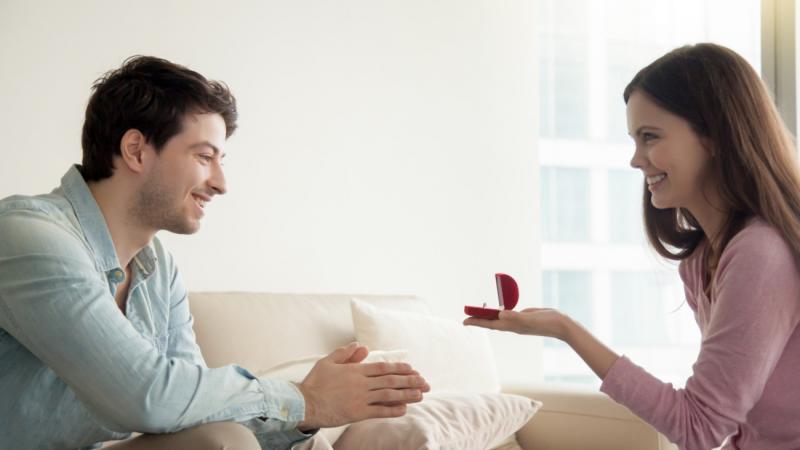 If you’re wondering what it’s all about, then here’s everything you need to know.

What Is The Leap Year Tradition?

There are a lot of traditions that have come from Leap Year, but this one is more widely known thanks to the 2010 romantic comedy Leap Year. It stars Amy Adams whose character travels to Ireland to propose to her boyfriend on Leap Day, the one day of year women are allowed to propose to men.

This concept stems from an old tradition that dates back to the 5th century. It’s said that St. Bridget complained about how women have to wait so long for men to propose. In response, St. Patrick allowed one day a year for women to make the first move — but he made the date February 29th, which occurs every four years.

As if that doesn’t sound outrageous enough, there’s more. If a man turns down a woman’s proposal, then she either issues him a fine or receives a beautiful garment from the man.

Of course, society is a lot more progressive compared to when this tradition began, and Adams’ character has full reign to propose to her boyfriend anytime she wants. Despite the gender equality that’s improved in the years since, it’s still pretty rare for a woman to propose to her male partner. A 2017 study by The Knot revealed that only one percent of straight couple proposals in the U.S. are done by women.

Since only one in three marriage proposals are actually a surprise, a woman taking advantage of this tradition could be a fun idea that’s certainly unexpected. The leap year might inspire someone to flip the script and propose to their partner.

If you think proposing to your partner is a good idea, then let the power of the Leap Year encourage your decision. There’s no exact formula for a marriage proposal. It should come from the heart, not feel forced and be authentic to your vibe as a couple.

If you need a few pointers to follow, here’s some advice.

Some people might enjoy being proposed to on the big screen at a hockey game, but that’s not the moment everyone is dreaming of. Keep it simple and don’t feel the need to make a grand gesture. As much as you want your partner to enjoy the moment, you should enjoy it too. If a low-key night at home is more your speed as a couple, take advantage of that intimate moment and pop the question then.

Buy A Gift For Both Of You

One of the best parts about being proposed to is getting a ring or on your finger afterwards. Of course, flipping the script means that you’ll end up giving instead of receiving one. If you want to commemorate the moment with a token of your own, consider buying a matching necklace pendant, bracelet or your own simple band.

Society has groomed us all quite well in sticking to what’s “normal” for men and women. He might be completely surprised that you’ve decided to propose, and it could take a hit on his ego. If that’s the case, hint at him that it doesn’t mean he still can’t propose back. He can still get his moment and also feel a lot more at ease knowing you’re equally committed. Plus, it could encourage him to have more fun with his proposal.

If there’s one thing to remember, it’s that women don’t have to wait until Leap Day to propose. We're lucky to have advanced far enough in society that women can make the decision for themselves things they wouldn't have been able to do back in the day. Either way, proposing on Leap Day could be a fun and sentimental thing to do if you're a traditionalist or just appreciate old stories.