Everything Seniors Need to Know About COPD

The more you know about common conditions like COPD, the more you’re able to protect yourself against it, and ensure your later years are as healthy as possible. 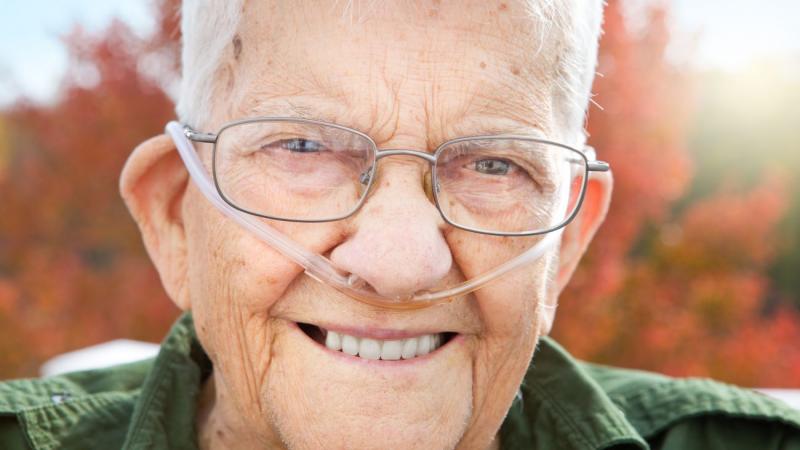 COPD stands for Chronic Obstructive Pulmonary Disease. It’s an umbrella term that describes a number of different inflammatory lung diseases that can cause restricted airflow in and out of the lungs. The two most common conditions within the umbrella of COPD are emphysema and chronic bronchitis. Each of the conditions that fall under the umbrella of COPD has their own symptoms and treatments, but many of the root causes are similar.1

Most cases of COPD are caused by the inhalation of particulate matter, like chemicals, gases, dust, or (most commonly) cigarette smoke. In 80 to 90 percent of cases, smoking cigarettes is the root cause of COPD. This smoke or particulate matter settles in the lungs, causing irritation and inflammation that the body handles by sending white blood cells to that area. This surge of white blood cells is intended to protect the body from the inflammation, but the side effect is that the enzymes released by the white blood cells eventually destroys healthy lung tissue.2

COPD is not immediately fatal, but it is incurable and progressive, which means that it will worsen over time. With the right treatment plan, you can manage your symptoms and improve your lung function, so you can live a long and comfortable life. However, complications and risk factors are common, so it’s important to be on top of your health once diagnosed.

Each unique disease within the COPD umbrella has its own list of symptoms, but many of them overlap. Typically, symptoms of COPD begin with shortness of breath, coughing, and increased breathlessness.

Many people think that these are common signs of aging, but that’s a dangerous assumption. These symptoms are insidious, and many people become more breathless over the course of several years before they realize that their mobility and independence have become severely limited.

If you experience any of these symptoms, it’s a good idea to consult a doctor right away. Other symptoms can include audible wheezing when you breathe in, tightness in your chest, and changes in the color and consistency of your mucus. People with COPD are also vulnerable to lung infections, so you may find that you have more bouts of the flu or bronchitis than usual.

If you’re at high risk for COPD — if you smoke regularly or exposed to hazardous chemicals or particulate matter through your job — it’s especially important to be aware of the symptoms. Once you notice that you’re experiencing these symptoms, it’s important to get to a doctor right away.

Your family doctor will be able to run you through a spirometry test, which tests the capacity of your lungs and how much air you’re able to expel. Depending on the results, your doctor may order further tests — including a chest x-ray or CT scan — which show the lungs in detail and can help rule out any other conditions that may be causing your symptoms.

Once these tests are complete, your doctor will have a better picture of the specific lung disease you have, as well as how far it has advanced.3

Once you’ve been diagnosed with COPD and your doctor has been able to narrow down the areas of your lungs that are affected the most, they will begin to formulate a treatment plan.

The first step in any treatment plan is quitting smoking. It’s integral to quit as quickly as you’re able, so you can limit further damage to your lungs. There are lots of support programs, as well as nicotine replacement therapies that can help you through the process of quitting.

If you’re often breathless during regular daily activities, your doctor may suggest pulmonary rehabilitation, which is a holistic combination of nutritional advice, counseling, and physical therapy. All these disciplines work together to help you improve your physical health and learn how to live with reduced lung function.4

If your breathlessness is starting to affect your body and there isn’t enough oxygen in your bloodstream, your doctor may suggest supplementing through oxygen therapy. These units deliver oxygen through nasal prongs, a mask, or a breathing tube. Some people use them during exercise, while others use them continually. Many people find that it’s a relief having the option there, even if they don’t use it that much.5

In addition to smoking cessation, oxygen therapy, and pulmonary rehabilitation, your doctor will likely prescribe a variety of medications to help improve your symptoms and help reduce inflammation and other exacerbations. There are lots of different types of medication that have been shown to be helpful, but all of them come with their own side effects. As such, it’s important to talk to your doctor about the benefits versus the potential risks.

Many people with COPD are not diagnosed until they’ve lost around 50 percent of their lung function.6 This means that there are a lot of seniors out there who may not realize that they’ve contracted COPD. In addition to causing permanent damage to your lungs, COPD is also responsible for complications that can include lung cancer, heart problems, pulmonary hypertension, and depression.7

If you’re a senior, there are lots of things you can do to lower your risk for COPD.

The most important of which is quitting smoking. Smoking will only damage your lungs further and will undo any of the benefits of medications, treatments, or targeted therapies.

If you think you’re at risk for COPD, talk to your doctor today.