Everything You Need to Know About Anorexia

Anorexia nervosa is a commonly misunderstood illness, and its high fatality rate is often overlooked. Yet anorexia is deadly – the National Eating Disorder Association¹ estimates 30 million people suffer from this eating disorder, and it can increase the risk of death by 10 times.

What makes anorexia so dangerous? Many people with anorexia hide their illness until it’s too late. However, if you know the subtle signs of anorexia to look for you can help your loved ones get treatment. 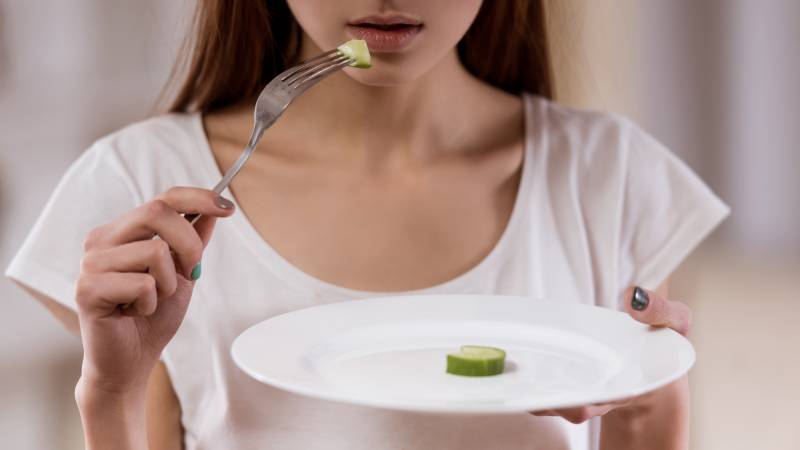 Anorexia is an eating disorder characterized by excessive weight loss (or lack of weight gain if a child or teen), distorted body image, restrictive eating, and sometimes purging through vomiting or use of laxatives. People with anorexia often restrict their calorie intake or avoid certain types of foods; sometimes, excessive exercise is also used in combination.

Anorexia is not a case of an individual choosing to be unhealthily thin, but rather a mental illness that causes severe weight loss. Those with anorexia typically have a distorted sense of their own bodies and feel as though they will never be thin enough, even if they’re losing weight. However, not everyone who suffers from anorexia is underweight – some people can maintain a healthy weight while still exhibiting the behaviors and signs of anorexia. This is called atypical anorexia.

While anorexia is most prevalent in women and teenagers, it can occur in any gender or at any age. Anorexia often begins during adolescence, when teens are going through several physical and mental changes. Anorexia can be a coping mechanism for people going through big life changes. A common misconception is anorexia is solely about food, but it’s often related to a need for control and perfectionism.

Symptoms and Signs to Look For

The signs of anorexia often start as abnormal emotions or behaviors, but over time the unhealthy lifestyle of a person suffering from anorexia is reflected in their physical appearance. Many behavioral and physical symptoms of anorexia are identical to those of starvation because anorexia is essentially starving your body.

Anorexia can manifest itself in different ways depending on the person, but some of the signs and symptoms are:

Physical signs of anorexia are often the easiest to detect. If you’re worried about a loved one, look for changes in their appearance, such as brittle nails, hair loss or thinning, or dramatic weight loss. Often, those with anorexia will also begin developing internal health problems as well, such as:

At its extreme, anorexia can lead to death. Suicide is much more common in people with anorexia than in the general population, with 1 in 5 anorexia deaths resulting from suicide, WebMd² states. Because of the dangerous effects of anorexia, it’s important to recognize these signs before they become irreversible.
What Causes Anorexia?

The causes of anorexia are not fully understood by doctors. However, it’s likely that anorexia is caused by a combination of factors. Genetic tendencies toward perfection and perseverance are associated with anorexia. Additionally, the Mayo Clinic³ states having a parent or sibling with anorexia has been shown to dramatically increase an individual’s risk of anorexia.

At its heart, anorexia is a psychiatric illness. Because of this, many sufferers exhibit psychological abnormalities such as obsessive compulsive traits, extreme perfectionism, and anxiety. Environment – whether from media, peers, or family – can also play a significant role in causing anorexia because of messages encouraging thinness as the ideal.

Thanks to increasing awareness about anorexia, treatment options are now widely available for those who need it. Often, people with anorexia don’t think they need to see a doctor or are scared to, preferring to be thin even if it means being unhealthy.

Because anorexia is often coupled with unhealthy perceptions, thoughts, and self-controlled behaviors, one of the most common treatment options is therapy. There are several types of therapies used by mental health professionals and primary care doctors to help people with anorexia, as well as support groups and treatment centers. Some people with anorexia need their day to day physical health monitored because of the damage anorexia causes, in addition to monitored mental health.

Unfortunately, there’s no known way to completely prevent anorexia – but it can be prevented in some cases. If doctors and parents see early signs of anorexia in children, it’s easier to get help before it develops further and sparks other problems. Anorexia is a complicated mental illness that can take many different forms, making its diagnosis and treatment difficult for all involved. If you’re worried you or a loved one is showing signs of anorexia, it’s important to know that it is treatable if you know the signs to look for.